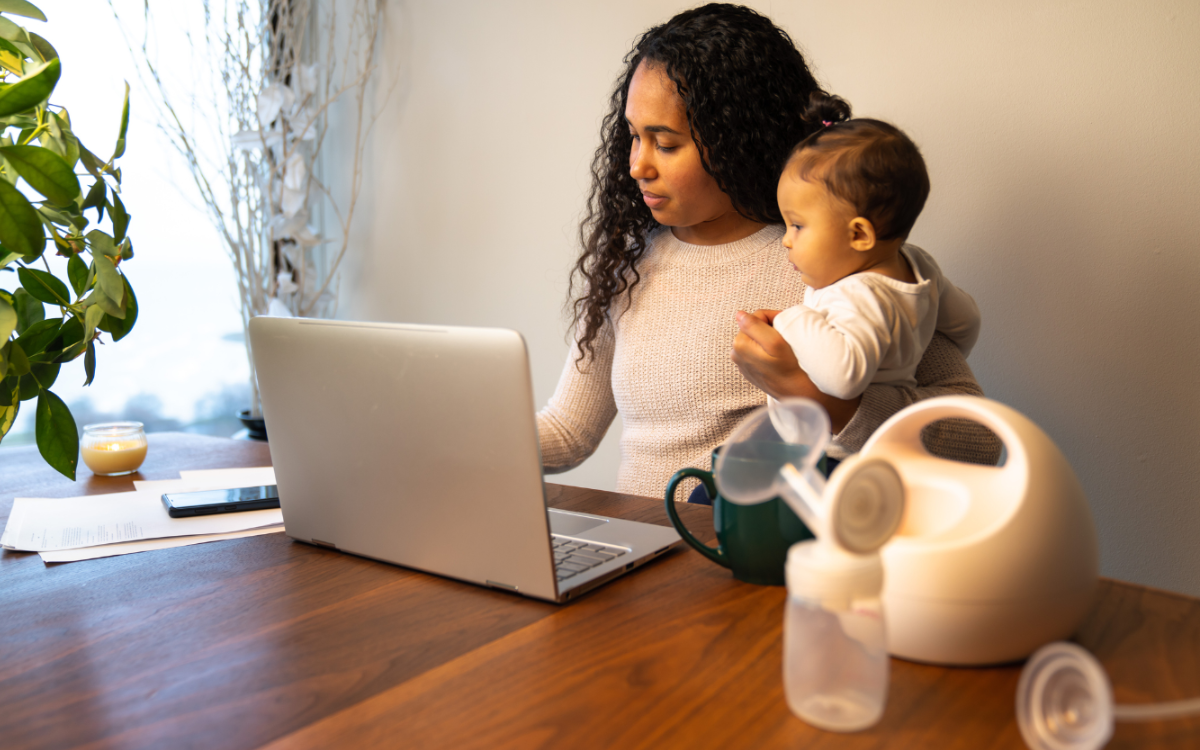 A working mum has been praised after exacting sweet revenge when she was told she had to turn on her camera during a recent Zoom meeting at work.

Despite her prior warnings, however, her boss hadn’t realized the woman had turned off her camera because she was pumping breast milk for her toddler.

The American Academy of Pediatrics (AAP) recommends that mothers exclusively breastfeed infants for about the first six months of life and continue breastfeeding while introducing complementary foods for a year or more.

Despite this, a CDC study found that about 60% of mothers don’t breastfeed for as long as they want. A research paper published by the University of Virginia and Virginia Medical School cited several factors behind this, including “unsupportive work policies.”

For a new mom write on Reddit as HappyGiraffehis employer had largely supported him in this – until recently.

The woman, who claimed to be a project manager and data scientist in “public health”, said she had only recently returned from maternity leave and was now working three days a week in the office. Being away from home may have made breastfeeding difficult, but she had developed a system that worked well enough.

“I have to express my milk at regular intervals for my baby,” she explained. “Fortunately, I have my own private office and can usually continue to work while pumping. I have a portable, hands-free pump that’s handy…but still obvious if I’m carrying it.”

Until recently, everything was going well. However, that all changed when she found out a Zoom meeting had been scheduled at a time when she “needed to pump.”

Rather than miss the meeting, she assumed she could “just keep my camera off” and keep pumping. But minutes into the Zoom chat, the person leading the meeting told attendees, “I just want to remind everyone that we expect you to have your cameras on because this is not a meeting. virtual is a simulated in-person meeting.”

When she attempted to explain her situation in a private message to the meeting leader, she got no response, with the chairman instead reiterating to everyone present that: “All the cameras are on.”

With little other choice, she went ahead and turned on her camera, with her breast pump left “clearly visible” to the 20 colleagues present, not to mention the accompanying noise.

“Thank you for your patience, I was adjusting my breast pump,” she told attendees. Although several managers reached out privately during the meeting to tell her she could turn off her camera, she went ahead regardless, obviously eager to prove a point.

His defiant stance also had the desired effect. According to the message, during a recent Zoom meeting, they were told, “Please turn on your cameras if you are comfortable doing so.”

An example of the kind of hurdles working mothers face and a reminder of the negative attitude many employers have towards remote work, the woman’s story has struck chords with many on social media. social, earning more than 40,000 upvotes in the process.

A new account praised the woman’s actions, writing, “You did this for everyone.” Only_Comments_On_GW agreed, noting that she “could have made a stink” and had the meeting organizer “keep on” especially since they had tried to explain the situation privately.

Raznill commented, “Yeah, I’m pretty sure there are laws about providing private clean spaces to pump. And having to let employees pump when needed. HR was probably livid.”

Despite the apparent victory, Harrywwc felt there was something slightly “condescending” about the woman being allowed to turn off her camera because she was pumping. “I think the subtext is really ‘turn on your cameras as long as you don’t make me uncomfortable’.”

ForeignAssociation98, meanwhile, said it was “funny and sad how you have to shame people to make a point. Glad you were able to maintain your dignity while making a point”.

Elsewhere, Acceptable-Site suggested that the woman’s employer may even have been in violation by bringing her into the meeting in the first place.

“Depending on where you are, some states require you to have a break from work so you can pump. The fact that you were working on your pump break could also have gotten someone in trouble,” they wrote. they stated. “On top of that, you have to have a private space to pump. By forcing you to turn on your camera, they’re violating that privacy.”

Large-Criticism7420 was equally critical, writing, “You have a right to privacy in these situations if you need it and you could have HR and compliance ass.”

According to the Department of Labor, “Federal law requires employers to provide reasonable time off for an employee to express breast milk for her nursing child for one year after the child’s birth whenever that employee requires to express the milk.

“Employers are also required to provide a place, other than a bathroom, which is out of sight and free from intrusion by co-workers and the public, which can be used by an employee to express his or her milk.”