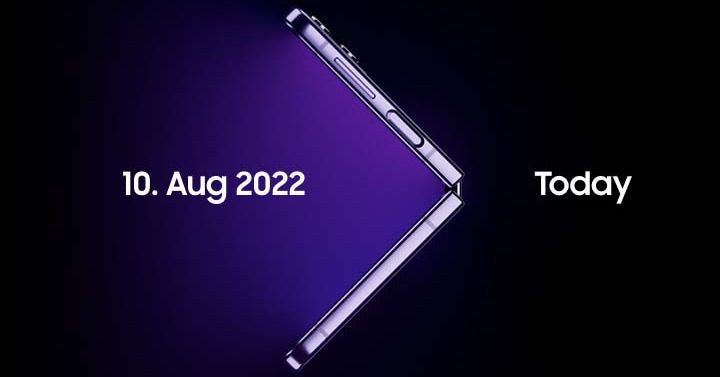 Samsung Galaxy Unpacked event: all the rumors about the Fold, Flip and Watch

Samsung’s annual summer launch event is almost here. The company will hold its August Galaxy Unpacked event on August 10 at 9 a.m. ET, a year and a day after last year’s folding-focused event. And, if rumors are to be believed, we’re set for a very similar batch of announcements consisting of a pair of foldables – the Galaxy Z Fold 4 and Galaxy Z Flip 4 – a new range of smartwatches with the Galaxy Watch 5, and probably new headphones.

We know there are foldables on the way because Samsung basically showed them to us in their promotional images and official trailer for its launch on August 10and Samsung’s smartphone boss teased the “new Samsung Galaxy foldables” in a launch blog post. The large amount of Watch 5 leaks also has us pretty confident that it’s due for an imminent reveal. Last year also saw the announcement of a new pair of true wireless earbuds, the Galaxy Buds 2, and this year we expect to see the launch of the Galaxy Buds 2 Pro. We already have a few reports from the last few monthsand one big last minute leak seems to confirm that they are ready for the event itself.

Samsung used its summer launch events to announce a new generation of Galaxy Note phones. But last year it skipped the release of what would have been the Galaxy Note 21 entirely and officially confirmed it was dropping the brand earlier this year. Instead, Note line-branded features have been carried over into the more premium devices in the Galaxy S line, with the Galaxy S22 Ultra sporting a Note-inspired design and a built-in S Pen.

In other words, don’t expect a Note 22 to be announced this week. Instead, here’s what Samsung might come up with.

Samsung’s Galaxy Z Fold devices are designed to combine the pocketability of a typical smartphone with the larger screen size of a tablet. That doesn’t seem to change for the fourth-gen of the foldable, which, like last year, appears to pair a 7.6-inch inner foldable display with a 6.2-inch cover display, according to a leaked specs list published by Ice Universe Twitter Leak.

Leaked press photos of the Z Fold 4 suggest it could also feature a very similar design to last year’s handset. They show a trio of cameras on the rear contained within an oval camera bump as well as what appears to be a center-facing punch-hole selfie cutout on the cover display.

But while the device as a whole looks similar, there are hints of changes coming to this year’s phone. For starters, although the size from corner to corner of the internal screen seems to stay the same, Ice Universe Reports that the screen could have a slightly wider aspect ratio that’s closer to a square than the 5:4 aspect ratio we saw last time.

Reports suggest more tangible improvements are also on the way. Obviously, there will probably be a faster processor which would be a Snapdragon 8 Plus Gen 1 this time around, but it also looks like the Z Fold 4 could benefit from a camera upgrade. Leaked specs suggest it will now feature a 50-megapixel main, 12-megapixel ultrawide and 10-megapixel telephoto camera on the rear, according to Ice Universe – the same as what we’ve seen on the Galaxy S22s and this year’s S22 Plus. Last year’s model had a trio of 12-megapixel shooters instead, meaning we could get a higher resolution main camera at the expense of a slightly lower resolution telephoto camera.

Unfortunately, leaks from Ice Universe suggest we could once again get an under-display selfie camera inside the Fold 4, which was responsible for some really poor photos on last year’s phone. It would also only have a resolution of 4 megapixels.

But perhaps the most interesting upgrade we could see with this year’s foldable comes from Google, whose Android 12L update released earlier this year contains a number of optimizations specifically targeting devices with big screen. It’s also updating its own apps to work better on tablet-sized screens and pushing third-party developers to do the same. These are all improvements that could lead to a better software experience on this year’s Z Fold 4.

Leaks suggest we’re also in for a year of minor upgrades with the Z Flip 4, the next entry in Samsung’s clamshell foldable lineup. Leaker Evan Blass has also released what appear to be official press renders of the Flip 4, which show a similar device to last year’s phone. There’s a two-tone design on the back with a pair of cameras alongside a small external notification screen, and inside it looks like we’re getting another punch-hole notch rather than an under-display camera ( Thank God).

That’s not to say there won’t be noticeable changes. A few different leaks have suggested that the Z Flip 4 might exhibit a less noticeable crease where the internal screen folds in half. Leaker Ice Universe reports that it will be “shallowerthan the crease on the Z Flip 3, which certainly appears to be the case based on some apparently leaked photos of the device. That’s not to say the Z Flip 3’s crease was particularly problematic; my colleague Dan Seifert said he pretty much forgot about it after a few days of use, but hey, we’ll never say no to an upgraded industrial design.

If the leaks are to be believed, it won’t just be the internal display that will get some improvements. Ross Young, a reliable source of display leaks, said he expected to see a larger notification display on the two-inch or larger Z Flip 4 rather than the 1.9-inch screen we saw on last year’s model. Other supposed improvements include a larger 3,700 mAh battery and a faster processor, the Snapdragon 8 Plus Gen 1.

Of all the devices on this list, we have perhaps the best idea of ​​what to expect from the Galaxy Watch 5. While last year’s Watch 4 lineup was split into the standard Watch 4 and the Watch 4 Classic (which came with a fan-favorite rotating bezel), this year it looks like we’re getting a Watch 5 and a Watch 5 Pro – and there’s no physical rotating bezel in sight.

Images of the two smartwatches were made public in early July by leaker Evan Blass (who else?). The Watch 5 Pro appears to only come in one larger 45mm size (which will apparently allow it to house a larger battery), while the standard Watch 5 will come in two smaller sizes, widely presumed to be 44mm and 40mm, in line with last year’s Watch 4.

Details are thinner on what new features the watches might offer. An FCC filing from June suggested we could see rapid charging on this year’s models as another report says we might see temperature detection available (potentially useful for seeing if you have a fever).

Presumably, the watches will include Google Assistant support at launch, while Google’s voice assistant only arrived on the Watch 4 months after release. Given the huge success Samsung and Google have made about Samsung’s smartwatches running Wear OS rather than Tizen last year, it seems very likely that the Galaxy Watch 5 will continue to run Wear OS 3.

We hadn’t had many Galaxy Buds Pro 2 leaks until this week, when WinFuture.de share what he claimed were official photos and specs for the headphones.

According to this report, we expect the Buds Pro 2’s big features to be a revised design and improved active noise cancellation whereby “even the loudest ambient noise” (to quote WinFuture apparently quoting Samsung) can be algorithmically silenced. Other specs include waterproofing up to IPX7, 10mm drivers, 360-degree audio, Bluetooth 5.3, and eight-hour battery life on a single charge, expandable up to 29 hours with the case. We assume eight-hour battery life is without ANC, given that the Galaxy Buds 2 offered 7.5 hours of non-ANC battery and five hours with ANC on.

9to5Google before reported that the headphones could cost $230 (compared to the original Buds Pro’s $200) and support 24-bit audio, while WinFuture says they will be priced at €229 in Europe. Since last year’s more affordable non-Pro Galaxy Buds 2 were so good they undercut Samsung’s Pro models, the company needs to up its game to make the Buds Pro 2 stand out.

Although most Samsung announcements usually leak ahead of events like these, there’s always hope the South Korean company has a surprise or two in store. Could we see the company announce new laptops? A new smart home feature for SmartThings? Or maybe even the return of the Galaxy Home Bixby smart speaker? I’ll be honest, the latter is unlikely. But it’s fun to dream, huh?