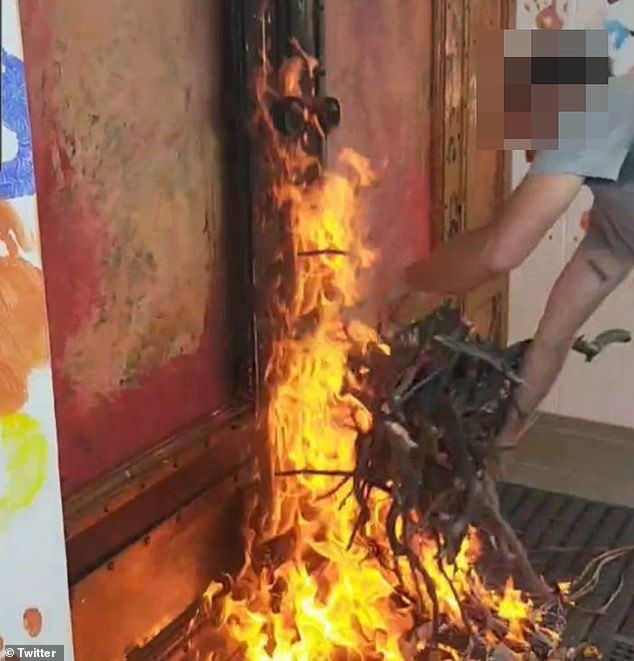 Proof that the fire in the old parliament was deliberately started

The old Parliament was deliberately set on fire by protesters, new images show.

Videos shared on social media show at least one protester stoking the fire at the door of the historic building with a pile of sticks.

Another video appears to show indigenous rights activists covering CCTV cameras in the front of the building before it was set on fire.

The old parliament was deliberately torched by protesters, new footage shows (above)

Witnesses said a protester demanded that the phones be turned off before the fire.

Police are investigating the incident after saying it was a traditional smoking ceremony that got out of hand.

Five fire engines and around 40 police attended the scene and the historic building was evacuated as a precaution while crews put out the blaze.

When the new footage emerged, an anti-vaccination protest group denied responsibility, insisting its members only filmed the fiasco and were not involved.

The group called Millions March Against Mandatory Vaccinations (MMAMV) Australia posted on its Facebook page that “mainstream media” and Australians online accused it of starting the fire and refuted the allegation.

â€œThis claim is completely false. MMAMV did not start this fire, nor did it ever claim that MMAMV was responsible for the fire, nor for the organization of the event, â€the message read. 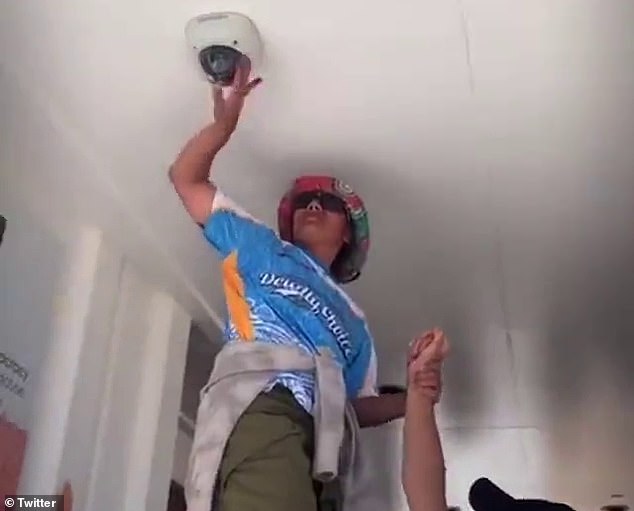 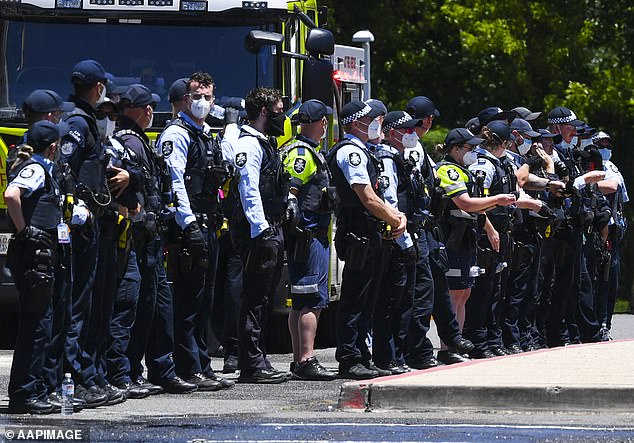 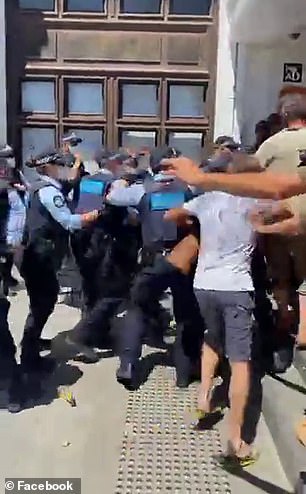 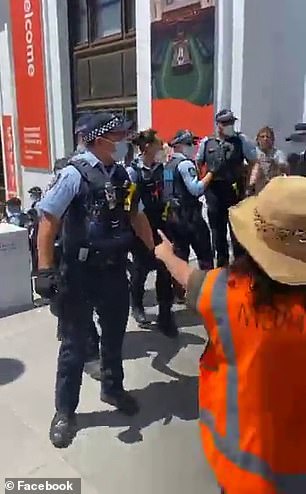 An anti-vax protester broadcast the event live, capturing dramatic footage (above) of police trying to contain rowdy protesters on the steps of the Old Parliament as the front door burned down

One of the group’s leaders, Michael Simms, attended the indigenous rights protest and smoking ceremony that spiraled out of control on Thursday before the fire started.

He broadcast the event live, capturing dramatic footage of police trying to contain rowdy protesters on the steps of the Old Parliament as the front door burned down.

His images show a policeman thrown to the ground as several officers are pushed back by protesters.

“Michael was wearing an orange vest with ‘media’ on the back, which had been given to him by First Nations representatives to indicate that he had permission to film the ceremonies,” the message read.

â€œMichael attended these events to spend time with First Nations Elders to learn about their history and traditions. ” 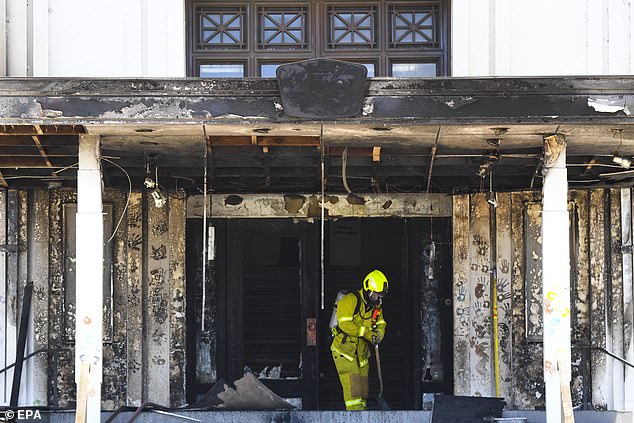 Police believe the blaze most likely started when a police-approved Indigenous smoking ceremony got out of hand. In the photo: the burnt down building

The Aboriginal Tent Embassy, â€‹â€‹a permanent site of protest occupation near the building, said it did not approve of the smoking ceremony and condemned the protesters who started the blaze.

Emergency services rushed to the scene to put out the flames, but not before the blaze had caused extensive damage, as protesters were heard shouting “let it burn”.

Observers of the plumes of black smoke outside the entrance to the building said rally participants also identified themselves as anti-government.

The blaze comes just a week after a similar blaze was started at the historic site that served as Australia’s federal parliament from 1927 to 1988.

Crowds of protesters began to gather almost a fortnight ago ahead of the 50th anniversary of the Indigenous Tent Embassy which was established in 1972. 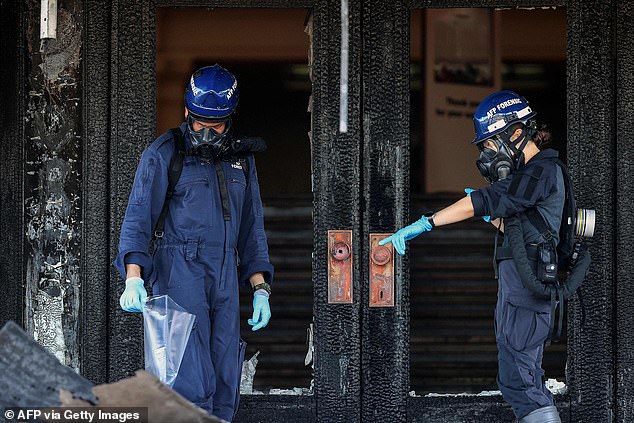 A Federal Police forensic team was next seen examining the building’s burnt-out main entrance and taking samples of damage from the fire. 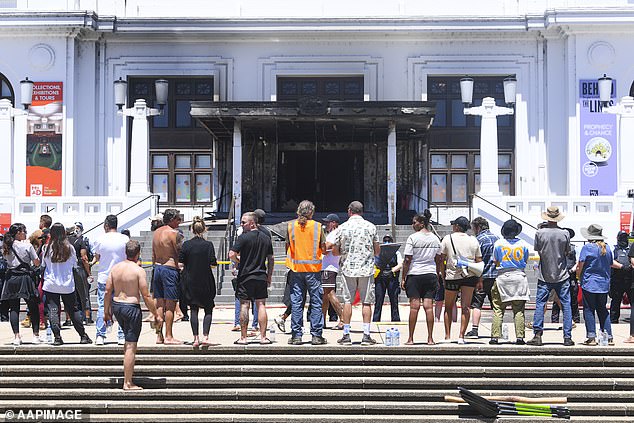 The current Australian Parliament was established in 1988 on Capitol Hill a short distance away, with the historic building now being used as a museum and heritage site.

After firefighters singled out the blaze, protesters continued to clash with media teams and police, some chanting â€œlong live usâ€ and â€œstop lyingâ€.

As leaders used a megaphone to talk about indigenous rights and colonization, bewildered onlookers recorded the plumes of smoke billowing from the building. 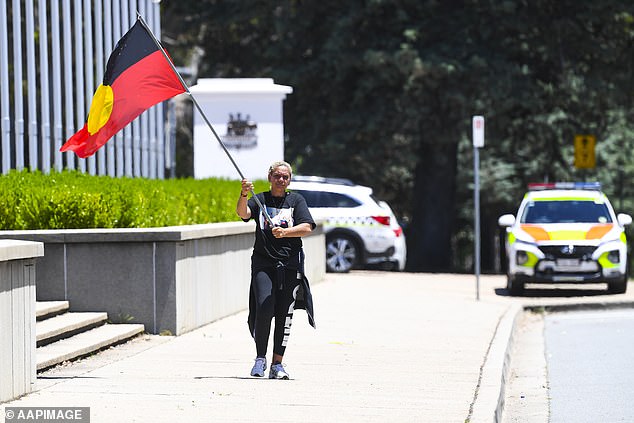 After firefighters singled out the blaze, protesters continued to clash with media teams and police, with some chanting ‘long live us’ and ‘stop lying’ (pictured, a protester holds a flag) 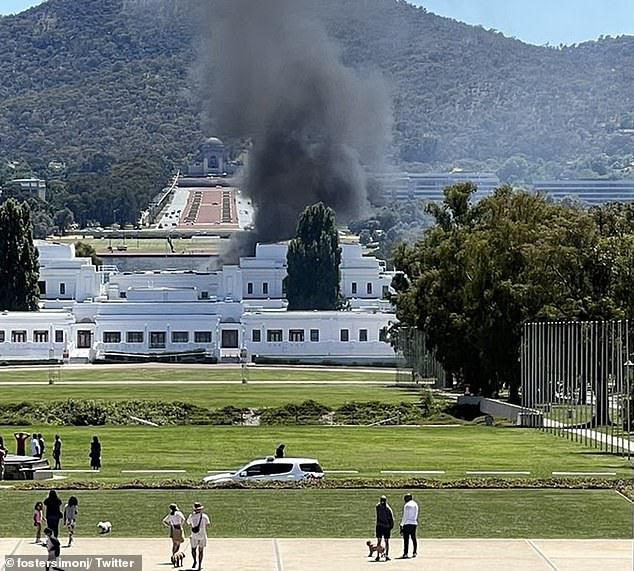 Emergency services rushed to the scene to put out the flames, but not before the blaze had caused extensive damage, as protesters were heard shouting ‘let it burn’