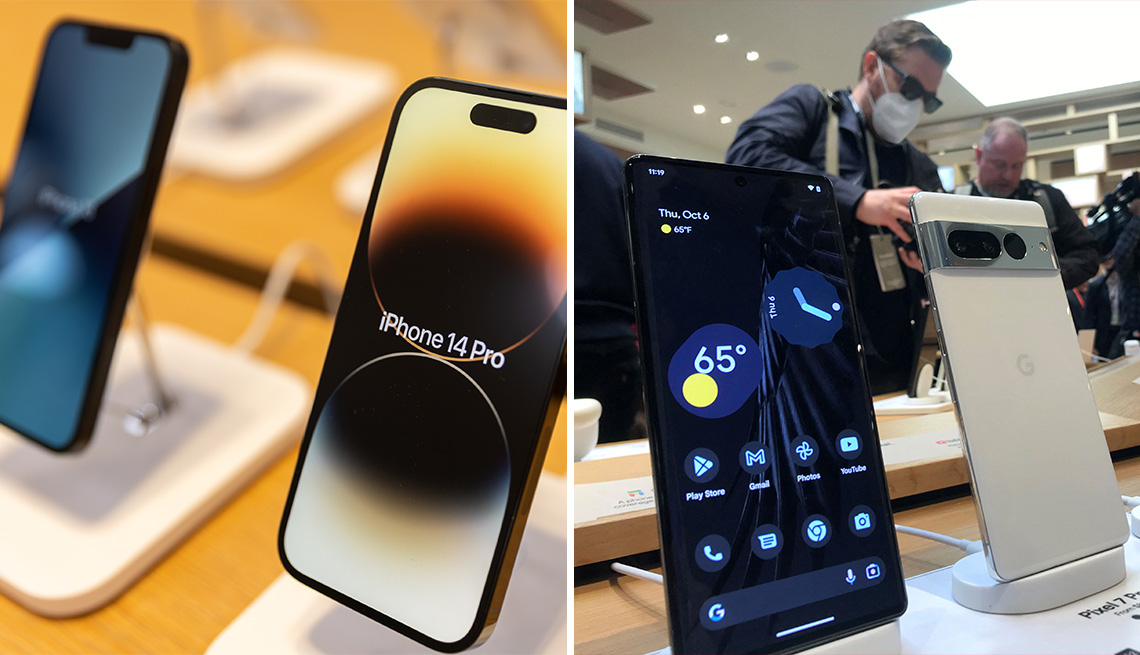 Vibrant displays, pro-grade cameras and other impressive display and performance features are getting a lot of attention in the latest generation of high-end smartphones.

Whether you’re a techie or not, you have to admit that taking a decent photo has never been easier, phones have never been faster, and maybe you’re at least trying to buy something again. But since prices start at $599 and go up from there, deciding which phone is best for your needs and lifestyle is key.

The latest features for iPhone and Android

Apple. Apple, which held about 55% of the U.S. mobile phone market in September, played it safe with its iPhone 14 series models that debuted the same month for $799 and up. The Emergency SOS feature that lets you call for help via satellite when cellular and Wi-Fi aren’t available is a potential lifesaver.

The same goes for the phone’s ability to detect a serious car accident and automatically call for help if the driver or passengers are unresponsive, a feature that’s been available on Google Pixel Android phones for some time. Sure, this feature is one you hope you’ll never use, but it’s definitely a sign of the future.﻿

Apple also beefed up the processor on the pricey iPhone 14 Pro devices and replaced the oval-shaped “notch” cutout at the top of the display on other iPhones with a clever new way to present notifications, dubbed Dynamic Island.

Google. Among the features likely to attract people to Google’s new $599 or $899 Pixel 7 or Pixel 7 Pro Android smartphones is an exclusive tool, called Photo Unblur. It might not work perfectly every time, but it can automatically sharpen your blurrier photos as well as those you’ve taken with other devices.

For the visually impaired, another great Pixel feature is its new Guided Frame, which uses sound cues and vibrations to help you take a selfie.

If you call certain toll-free numbers with the Pixel, you may see wait times on the call button before pressing it. When you make a call, transcribed menu options appear on the screen for various companies before they are spoken. For example, if you’re calling Home Depot, you’ll see an option you can tap that says, “If you’re calling about a major appliance, press 1.”

And Google has added a Pixel bedtime cough and snore detection feature to help you better understand why you’re or aren’t getting a good night’s sleep.

Samsung. People intrigued by unconventional hardware designs might want to look at a foldable Android phone. Budget permitting, they might be willing to splurge on the Galaxy Z Fold 4 that Samsung unveiled in August.

In its deployed position, the phone has a small, tablet-sized 7.6-inch display, the largest display available on a smartphone. The screen can simplify work if you need to multitask. When folded, it fits in your pocket.

But the phone comes at a high price. The Fold 4 costs around $1,800, which is about three times the price of the Pixel 7 and double the price of some new iPhones. And iPhones aren’t known for being cheap.

If you need a new phone but are on a tight budget, you can reduce the sticker shock by trading in an old handset or spreading the payments out over 24 to 30 months. You can also look for great feature-rich smartphones at slightly lower prices by considering models from reliable brands like Motorola, OnePlus, and TCL. Samsung also sells mid-range models.