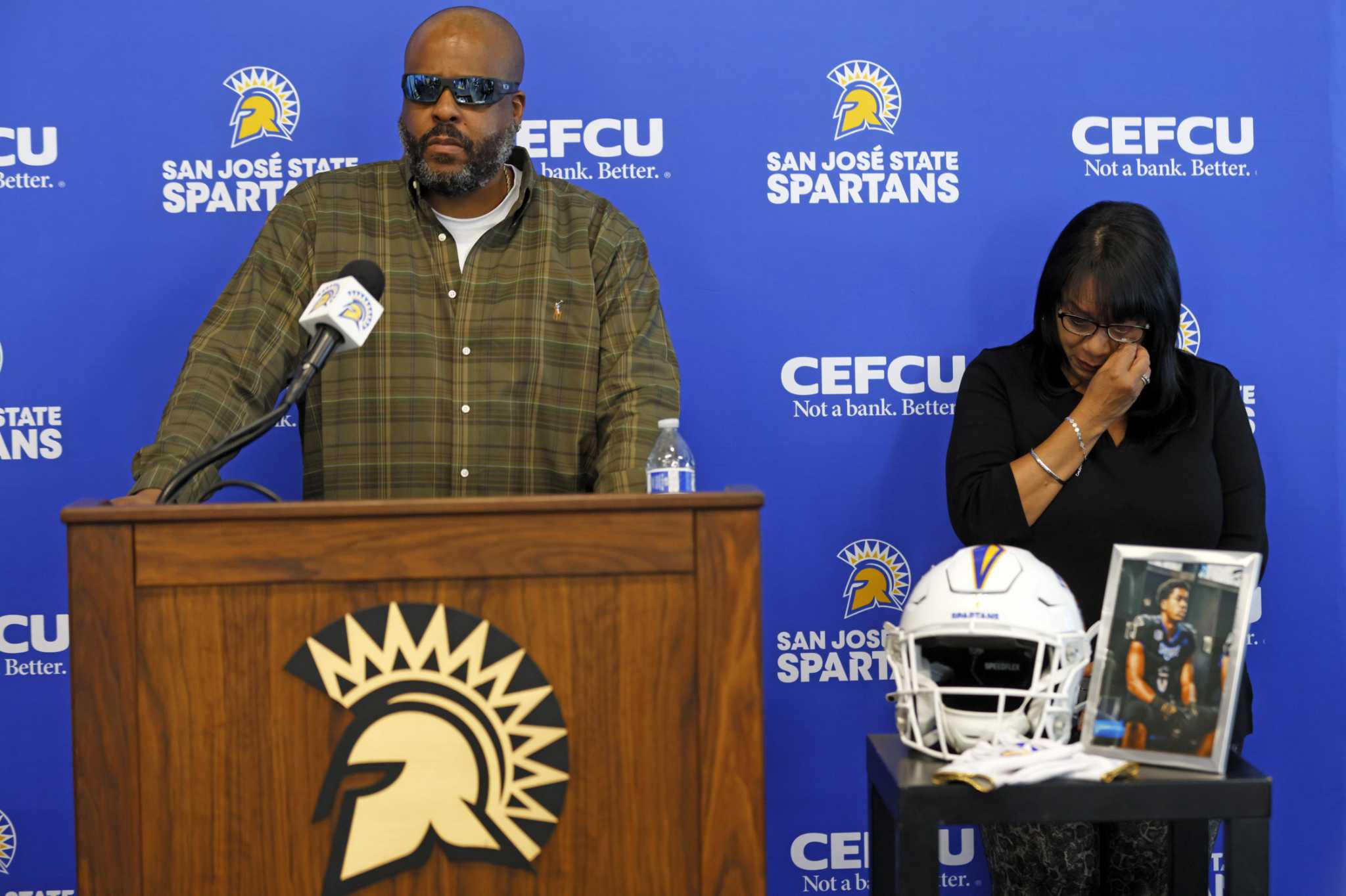 ‘I loved that kid. We all did’

In his first few months at San Jose State, freshman running back Camdan McWright had struggled to adjust to Division I football’s demanding positional coaches, larger linebackers and congested depth boards. But after weeks of languishing on the bench and in his dorm, McWright was set to travel for his first road game with the Spartans — a major step towards his NFL dream.

He could finally say it:
I did it.

I am part of the travel team.

About five hours before the team’s scheduled flight to New Mexico State last Friday, McWright was riding a scooter to an early morning team meeting when a school bus hit him and killed him. at a crosswalk right next to campus. He was 18 years old. What followed — SJSU’s decision to postpone the game, an emotional vigil at that crosswalk, GoFundMe donations to his family from people who barely knew him — reinforced the impression McWright had left on his new community.

In just four months on campus, he made his teammates, coaches, classmates and professors believe in his potential. It wasn’t just that McWright’s speed and strength hinted at a quick rise on the Spartans’ depth chart. With a wisdom that belied his age and a knack for bringing people together, he seemed headed for greater things than even football could offer.

“To a lot of people who knew him, Cam was like Superman,” said Marlon Archey, athletic director of McWright’s alma mater, St. Genevieve High School in Panorama City, Los Angeles County. “Now what do you do when Superman falls?”

In the case of the Spartans, there’s only one answer: try to win Saturday night’s rematch against Nevada in McWright’s honor. After taking time off last Friday and Saturday to grieve, the team returned to training on Sunday, where they worked out for about 20 minutes of light drills. On Tuesday afternoon, emotions were still so high that the Spartans refused to release players at their weekly press conference.

In their place were McWright’s parents, Cleve and Tina, who had been inundated with media inquiries since their son’s tragic death became national news. Wearing sunglasses to hide his tears, Cleve thought back to the last time he saw Camdan.

It was early October, just as Camdan was beginning to gain the trust of his coaches. In town for SJSU’s “Parents & Family Weekend,” Cleve and Tina watched from the stands as Camdan made his college debut at the end of a blowout win over UNLV, rushing three straight to six meters in total.

The next morning, he told his parents that he wanted to spend time alone with them instead of attending scheduled school activities. That day, the family toured downtown San Jose, remembering to walk around and dine at restaurants.

“When it was time for the parents to come home, I gave Cam the biggest hug I could give her,” Cleve recalled. “I just said, ‘I’m so proud of you. We’ll be back in a few weeks to spend Thanksgiving with you.

As Cleve and Tina grapple with a life without their only son, they find solace in the number of other people who have cared for him. A GoFundMe page that Camdan’s older sister, Camari, set up to cover funeral and other expenses took just three days to reach its $40,000 goal. Tina estimated that she only knows about a quarter of the 457 people who donated.

Last Friday evening, hundreds of SJSU students marched from campus to the nearby intersection where McWright died. For more than an hour, his teammates shared some of their favorite memories: his encouragement in training, his commitment to the study of cinema, his love for comic books and superheroes.

Later that night, some of McWright’s old high school friends watched videos of the wake online. It was no surprise to them that in just over 16 weeks, McWright had become part of the SJSU community.

“He’s got this special light on him,” said Ben Macias, McWright’s starting quarterback for two years at St. Genevieve High. “Wherever he goes, he’s just a beacon of good.”

Dan Horn, principal and president of St. Geneviève, once asked teachers at the school to stop bringing McWright to fundraising events. A star athlete with a 4.3 GPA and a group of friends that covered all the cliques, he had become the unofficial spokesperson for the Valiants – an unfair request for any teenager.

But in McWright, Horn and the rest of the Sainte-Geneviève trustees saw the ideal embodiment of the mission of the Catholic preschool-12th grade institution.

In his senior year, McWright placed fourth academically in a 144 class, led the football team to its first undefeated season, won the league championship in the 100 and 200 meters and spent her free time as a teacher’s aide for fourth graders. . In the little time he had left, he read books to preschoolers.

“Cam was one of those students you get once in a generation,” said Horn, who closed the school last Friday shortly after McWright’s death was announced over the public address system. “There are always kids who are the cream of the crop, but Cam was one of those kids who stood out from the cream.”

It didn’t take long for SJSU head coach Brent Brennan to recognize this. After running backs coach Alonzo Carter sent her a video of McWright at the start of McWright’s senior year, Brennan watched about three games and then scheduled an in-person visit to St. Genevieve.

During that meeting, he could sense that McWright wasn’t just a potential Division I contributor—he was a locker room boss. McWright committed to the Spartans for the military and a host of Ivy League schools. When Cal offered him a scholarship just before signing day (Dec. 15) last winter, he didn’t hesitate.

SJSU had been the first FBS program to make him an offer, on October 27. Just as McWright had done when he rejected interest from powerful prep schools after his sophomore year in breakout to stay at tiny St. Genevieve, he prioritized loyalty over prestige.

“He understood that San Jose State wanted him more than Cal, and he had to go where he was wanted,” said CJ Gable, a former NFL player who is now the Porters’ coach. balloon of St. Genevieve. “A lot of kids wouldn’t understand that, but he did. He was just different like that.

Over the past few days, the Spartans have been thinking of ways to honor McWright in Saturday’s comeback game. Among the gestures in preparation are a moment of pre-match silence and a shirt badge with McWright’s number 6.

Nothing SJSU could do, however, eases the sting of his absence. This was supposed to be when McWright gained ground in the Spartans running back rotation.

He had just been part of the travel team, after all.

“Camdan had a light and a spirit that he carried with him every day,” Brennan said. “I loved that kid. We all did it.