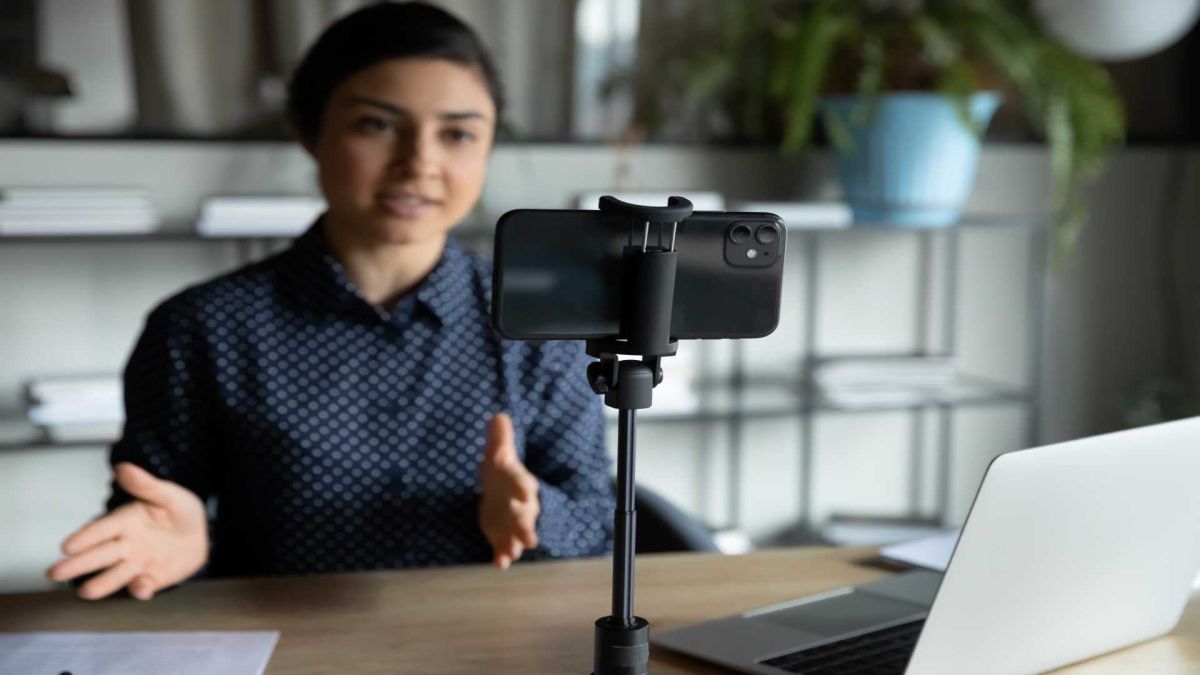 How to use your phone as a webcam

Although it has become easier to find the best webcams, if you are in a hurry or don’t want to buy another gadget, you can use your phone as a webcam.

This guide will show you how to use your phone as a webcam and lists several apps that can help you get the most out of your phone’s camera and video conferencing like a champ. We have options whether you use Mac, Windows, Android or an iPhone.

To get started, you can simply download one of the best video chat apps directly on your smartphone. Zoom, Skype, Google Duo, and Discord all have free mobile apps for Android and iOS devices.

However, if you want to use your smartphone as your computer’s webcam, you’ll need to do something a little different. This involves downloading an app to your phone, which broadcasts a signal over Wi-Fi to an app on your computer. This desktop app then tells the video conferencing service of your choice (Skype, Zoom, etc.) that your phone is a webcam.

If you really want to look and sound your best on video calls, you’ll also need one of the best ring lights as well as one of the best microphones. Our guides will help you choose the right one for you.

Ready to learn how to use your phone as a webcam? Here are our favorite apps to turn your smartphone into a video conferencing camera.

How to use your phone as a webcam: best apps

After downloading and installing the EpocCam Webcam app on your smartphone, you will be directed to www.kinoni.com to install the appropriate drivers on your Mac or PC. You then need to download EpocCam iPhone Webcam Viewer from the App Store on your Mac or PC, and have your phone and computer on the same Wi-Fi network. You can also connect your iPhone to your computer via USB. (You can also use iPads.) Unfortunately, this app no ​​longer works with Android devices.

Once the drivers are installed, the app on your iPhone will change to show an icon of your phone with circles coming out of it. After launching the app on your laptop, you should see the video from your phone’s camera on your computer.

You can only use your rear or front camera on your iPhone. The free version of EpocCam limits your camera resolution to 640 x 480, and the app launches with an advertisement; if you upgrade to the paid version ($7.99), you can stream at resolutions up to 1080p, use pinch-to-zoom, use iPhone flash as a light source, get HDR video, and more .

Works with Android and iPhone

Only works on Windows PCs

iVCam works over Wi-Fi as well as a USB connection, and its mobile app is available for Android and iPhone. However, its desktop software only works on PCs, so it’s not an option for Mac users. It supports multiple resolutions (up to 4K) and you can adjust camera settings like exposure, frame rates, and ISO. It also lets you use both cameras on your phone, supports landscape and portrait modes, and lets you swap your background.

iVCam has a free trial, but you can upgrade to a full version, which costs $9.99 for a one-year subscription or $24.99 for a permanent subscription.

Works with iPhones and Android phones

Only works with Windows

NDI requires you to download an app on your iPhone, and an app and driver on your laptop. Your computer and smartphone must be on the same wireless network; the NDI HX app then transmits a stream from your smartphone to the NDA app on your PC. Using the NDI Virtual Input program, you can then tell the chat app of your choice to use your iPhone as a camera.

NDI’s mobile app has some nice on-screen tools, such as zoom, exposure adjustment, and the ability to use your phone’s flash as a light source. But its desktop software for chat apps is only available for PCs, and at $20, it’s also pricey.

Allows you to run the app in the background

As with competing products, DroidCam comes in free and paid versions. The paid version, DroidCamX Pro, which costs $5, gets rid of in-app ads, upscales the resolution to 720p, and gives you more camera controls, such as flip, mirror, and rotate video, adjust brightness and contrast, and turn your smartphone LED flash on for more light.

DroidCam, made by Dev47apps, has an app for Android and iPhone, but its desktop client only works on Windows and Linux systems. If you have a Windows machine, you’ll need one running Windows 10 64-bit, but if you’re using Windows 7 or 8, both 32 and 64-bit versions are supported.

You can connect your smartphone via Wi-Fi or USB, the latter of which helps preserve your phone’s battery life. If you are using an Android phone, you can run DroidCam in the background and use it as an IP webcam.

Free (but upgrading is a bit expensive)

Connects only via USB cable

Only for iOS/MacOS devices

NeuralCam Live is easy to set up and use, even if it’s only for those with an iPhone or iPad, and it’s only for macOS. Unlike the other apps in this roundup, this app works via USB connected to your laptop or Mac computer. But once you’re logged in, it works reliably. Just open it in your Google Meet, Zoom, or other video chatting app. Note, however, that the application does not work with Safari. So use Chrome and Firefox.

Besides turning your iPhone into a webcam, the free or trial version of this app also has some unique features: Head Bubble puts your head in a circle and then hides almost everything else. Gesture Guard detects and scrambles different types of gestures that you may not want others to see. We found it to be inconsistent in detecting and blurring images.

NeuralCam Live is free, but if you upgrade ($29.99/year or $4.99/month), NeuralCam Live Plus gives you additional features, such as a Low Light mode, a special ” Soften” and other video editing styles. Additionally, it removes ads for other NeuralCam apps.

Reincubate Camo Studio’s software provides nice controls and settings: for example, you can switch between different lenses on your iPhone, stream your video at higher resolutions, zoom and pan, add more filters, and more. However, you will need to upgrade for these features, which costs $4.99 per month or $39.99 per year.

However, the free app lets you choose between the front and rear camera of your iPhone. And the free trial also lets you select one of several color or black and white filters.

Initially, Reincubate Camo only worked with Macs and iPhones, but has since been updated to be compatible with Windows PCs. And, since August 2021, the company has released a free beta version of its app for Android devices. However, regardless of the platform, you will need to connect your phone to your computer via USB.

Tips for looking your best on video calls

While your smartphone camera is quite capable – some of the best camera phones take some pretty amazing photos – there are still a few things you can do to make sure you look and sound your best. best when video chatting with friends, family and colleagues. .

1. We recommend picking up one of the best iPhone tripods, so you don’t have to prop your phone up on a set of books or something more precarious. Android owners fear nothing, as these tripods generally work with phones of all types.

3. Because your phone’s audio quality isn’t always the best, check out the best microphones to make you hear better on calls.

4. Using one of the best ring lights can also significantly improve the quality of your video.

5. Keep an eye out for updates, price changes or additional features of these apps. In some cases, a new update may result in better resolution settings or the inclusion of an important feature. Or the app may be available at a lower price.

6. You’ll also want to keep your phone plugged into a power source because streaming video from your phone will drain its battery in no time.