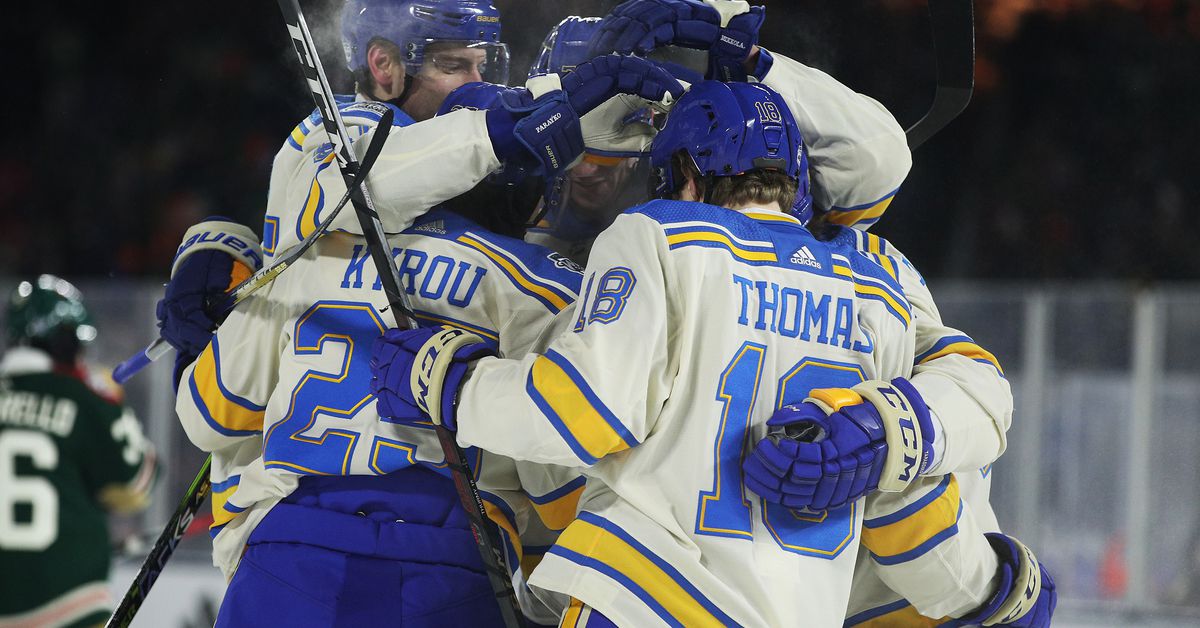 This was when the Wilds were probably doomed to lose.

Highlights of the game:

First period – Beachwear aside, the Blues and Wild started the game at -8 degrees. For those of you scoring at home (again, is anyone doing this?) This is the coldest it has ever been for a hockey game. The Blues put pressure on the Wild, but couldn’t get any pucks past starter Cam Talbot. THAT WAS until David Perron broke the tie 0-0. With about five minutes left in the period, Ryan O’Reilly shot the puck towards the net. The puck did not hit the net, however. He bounced off a Wild player and directly off Perron. Perron fired a quick shot. He beat Talbot and gave the Blues a 1-0 lead.

A few seconds later, the Blues scored again. Although true, they put the puck in the wrong net. Kirill Kaprizov led the puck at the net. Instead of going to the intended recipient, the puck bounced off Niko Mikkola. Jordan Binnington couldn’t stop the redirected puck and it ended up in the back of the net.

Second period – Sometimes the Blues do not have the best second periods. And I’m always one of the first people to report them. The second period tonight? Certainly not one of them. Just under thirty seconds into the period, Jordan Kyrou scored to give the Blues a 2-1 lead. The Blues won the face-to-face. Jordan Kyrou then skated with the puck, including turning a Wild player into a traffic cone. Once he passed his “defender”, he centered the puck. Instead of the puck going to Vladimir Tarasenko, it bounced off a Wild player and over the goal line. 2-1 Blues. Not all goals are pretty, but they still count, don’t they?

But wait there is more! The Blues took a 3-1 lead thanks to Winter Classic legend Vladimir Tarasenko. Robert Thomas brought the ice puck. Thomas handed the puck to Kyrou. Kyrou showing the patience of a saint saw Tarasenko fall into place. Tarasenko arrived and Kyrou handed him the puck. Tarasenko detonated the puck in front of Talbot and put Kyrou on the scoresheet again.

BUT WAIT THERE’S MORE. The Blues not only scored 5-5, but their second power play of the night. (The first didn’t really count as it lasted about 20 seconds) The Blues moved the puck. The puck finally hit Kyrou’s stick. Kyrou shot the puck and it bounced off Talbot’s pads. Ivan Barbashev was there to collect and drop the payment for a puck behind the goal. The Blues are now up 4-1 and ROLLING.

Just when you thought they were done scoring in the period … THERE IS STILL ANOTHER GOAL. Kyrou brought the puck into the zone. He passed the puck to Robert Thomas. Thomas being generous, he passed the puck to Kyrou. Kyrou Dipsy scrawled the puck for a moment. Up to BAM. Instant shot just in front of Talbot for the Blues’ fourth goal of the period. I can’t believe I just typed this.

Rem Pitlick (what an unfortunate name for that guy) brought the Blues back to earth for a second. Pitlick scored another goal that could only be described as a very lucky rebound. He shot the puck behind the goal. The puck bounced off Binnington’s stick. He bounced off Binnington’s helmet. He might have even bounced off the third row guy’s beer. Who really knows. All we know is the puck ended up in the back of the net.

So the Blues will enter the second intermission with a 5-2 lead, right? What do you mean, they still scored? Is it 6-2 now? Torey Krug scored a goal with less than a minute to go? Cam Talbot was on the bench to start the third? Yes to all of the above. The Blues have scored FIVE goals during the period. FIVE. EFF EYE VEE EEE. 5. You get the idea.

Shots in the second period were 14-9 in favor of the Blues.

Third period – With 11:20 to go in the period, the Wild is closing in on three. (LOFUCKINGL) Mats Zuccarello hit Ryan Hartman with a perfect pass. Hartman once managed to overtake Binnington. Kudos to the Wild for scoring their first goal of the night with no luck.

The Wild pulled out their goalkeeper aka Not Cam Talbot (Kappo Koopa Troopa Kahkonen) with a good chunk of time remaining. The Wild didn’t score 6v4. They added a goal after coming down to 6v5, however. Kevin Fiala stuck the clock and then shot the puck. He scored to make this game a lot more interesting than it should have been.

The Wild were a pain in the ass for the rest of the period. They could have been that way BECAUSE BLUES CANNOT REACH AN EMPTY NET FRIGGIN BUT MAY SCORE 6 WHEN SOMEONE IS IN IT. * ahem * Anyway, the Blues won. The Blues are now 2-0 in Winter Classic’s. They are also 2-0 in nicer uniforms. This is just how it goes. The Blues face the Penguins on Wednesday night. This game is also on TNT. At least the fans won’t be freezing their buttocks.

Tweetamania launches Wild Brother. No, not these Wilds.

Forget about the water. Binnington had something else in the bottle tonight.

Jordan Binnington had chicken broth in his bottle and not water (CONT): “I guess because it was so coldâ€¦ #stlblues

No longer on the move that ended the night of the Wild before it even started. I want to know what was (if any) in the coolers.

O’Reilly: “Everyone was talking about the cold and we didn’t care. Everything will be fine. Getting off that bus it’s the fastest wake-up call I’ve ever woken up for a game. We were just sitting there. to go oh my god. Nice little tip. I was definitely wide awake. ” #stlblues

I love it for Kyrou. Who may or may not be part of the elite.

It’s gonna hurt like a female dog when this guy leaves town, right?

How to easily use your iPhone or Android as a webcam